Spiritual Leader Ram Dass Reveals His True Self in ‘Becoming Nobody’ 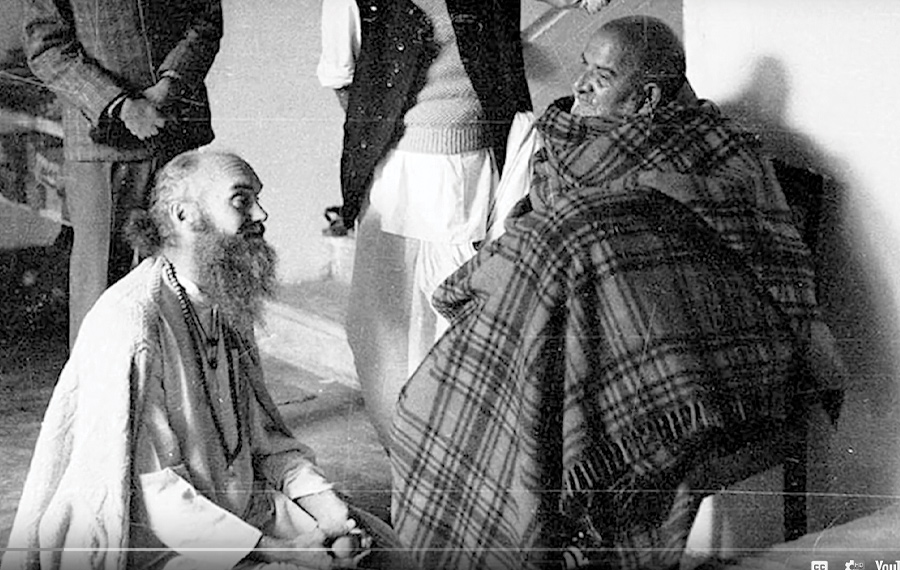 Jewish filmmakers Jamie Catto and Raghu (Mitchell at birth) Markus do not believe there is anything been-there-done-that about the 88-year-old spiritual leader Ram Dass (“Servant of God”). Born Richard Alpert, a Jew, and at one time a psychology professor/LSD pioneer at Harvard (think Timothy Leary), he ultimately morphed into an iconic New Age/Hindi guru.

His is an amalgam of Eastern and trendy philosophies that include attaining an egoless life — neither defined by past regrets nor future strategies—where only the present deserves to be experienced (celebrated) and lovingkindness/awareness takes precedence over envy, competition and ambition. His first book, “Be Here Now,” recounting his own personal journey on a spiritual path, is a Bible among New Agers and he is viewed as the Granddaddy of the self-help movement.

Director Catto and producer Markus maintain that Ram Dass, who lives on Maui and has suffered a stroke, has greater application today than ever and that their documentary about him, “Becoming Nobody,” couldn’t be timelier. Just check out his presence on social media. He has well over a million followers on Facebook, Instagram and Twitter, not to mention his multi-thousand admirers on such digital outlets as RamDass.com and the Beherenownetwork.com.

The internet plays its role in boosting his audience, the filmmakers concede, but more to the point there’s a new generation of activists on the scene who simultaneously realize they have to clear their own minds and habitual ways of thinking before they can effectively tackle political/cultural issues.

“Ram Dass is a powerful support for anyone looking to make changes [psychological, moral, emotional, intellectual, cultural or political],” Markus told the Journal in a conference call. “He creates trust. I never met anyone who was more present in the moment for me.”

Asked to what degree favoring other philosophies or religions over Judaism may also hint at a kind of unconscious self-hating embarrassment among some Jews, Catto put forward an inflammatory response.

“In this time of shallow and egoic people cashing in on the New Age, Ram Dass is 100% authentic, humble, hilarious, real,” added the British-born Catto, speaking from London. “People can see the difference between him and other teachers. His teachings are practical and down-to-earth. They have mainstream appeal.”

Catto, 51, a musician and videographer best known for his world music video “One Giant Leap 2: What About Me?” has been a dedicated Ram Dass follower for 26 years. Markus, 72, who headed a music production company for 20 years, has been an acolyte for half a century. For the past 12 years he has served as executive director of Love Serve Remember, a foundation dedicated to Ram Dass teachings.

Featuring current interviews with Ram Dass, interwoven with archival footage of past conversations and public lectures, “Becoming Nobody” highlights an erudite man awash in charm and a self-deprecating sense of humor. Still, depending on viewpoint, he is an embodiment of enlightenment or a paragon of psychobabble appealing to those followers with lots of discretionary income and far too much time on their hands.

Markus reluctantly admitted that following and/or espousing spiritual paths might have limited application for those who are struggling to survive. That said, he suggested the most impoverished in India are, thanks to their culture, already inculcated with a sense of karma and connectivity to a Divine presence. As for the already “enlightened ones” (especially among the well-heeled), they have a duty to feed and love the poor, Markus said. Compassion is the core of Ram Dass spirituality.

Asked about the large Jewish presence in the movement — not least such notable leaders as Jack Kornfield, Sharon Salzberg, and Joseph Goldstein — Markus said a spirit of adventure and an interest in learning about other worldviews is intrinsic to the Jewish cultural experience. And so it’s not surprising at all.

Asked to what degree favoring other philosophies or religions over Judaism may also hint at a kind of unconscious self-hating embarrassment among some Jews — e.g., fear of appearing provincial or worse, tribal — Catto put forward an inflammatory response, acknowledging that what he thinks on this topic is taboo and perhaps he should remain silent.

He reluctantly said that as the Chosen People the Jews were chosen to serve and had the opportunity to do so with the kabbalah, but for selfish reasons chose not to, believing others outside the faith were not ready for such power. That was a huge mistake and the Jews have suffered horrific karma for thousands of years, he continued. Spiritual leaders such as Ram Dass et al are healing that ancient self-inflicted wound.

Whether or not Ram Dass would concur is arguable. In the film he recognizes his Jewish roots, but like many countercultural icons, felt alienated from his own background and the society at large with its broader teachings (philosophical, psychological, intellectual). He studied many religions and philosophies, though ultimately found special solace in the presence of Hindi leader Neem Karoli Baba who, according to all accounts, was saint-like, a doorway to the Divine. It was an encounter that paved the way for his particular brand of “becoming nobody.”

Ram Dass’ advanced years have only enhanced the filmmakers’ shared conviction that the definitive film on him was begging to be made, although two previous movies on the spiritual leader are out there, including a 2017 documentary short, “Ram Dass Going Home,” which was shortlisted for an Oscar nomination.

Making the film was challenging, with many false starts. Visually, it didn’t work initially and the picture took longer to pull together than expected. “And there are always challenges in raising money,” Markus said. “Still, we didn’t have to pull teeth. Investors loved the concept and wanted to support it.”

Ram Dass played an active role in shaping the film and said he has been deeply gratified by the audience response at early screenings in Maui. The filmmakers are hopeful that moviegoers leave the theater “inspired to turn their lives around from meanness and self-protection to loving kindness and service,” Markus said. “That’s the key to Ram Dass.”

“Becoming Nobody” is currently playing at the Laemmle Glendale, Playhouse 7, Claremont 5 and Monica Film Center.