With the red carpet rolled out and Moroccan music filling the Em Habanim synagogue in Los Angeles last week, more than 400 of the city’s Moroccan and Sephardic Jews gathered to honor Moroccan Muslim anthropologist Aomar Boum for his two decades of promoting Moroccan Jewish history and encouraging warm relations between Jews and Muslims.

“Dr. Boum has been the champion of bringing different people, particularly Jews and Muslims, together with a sense of mutual respect and also helping to keep alive the ancient history of Morocco’s Jews at UCLA,” said Em Habanim’s Rabbi Joshua Bittan.

Jewish community activists at the event said they were not surprised that Boum was the head of UCLA’s Sephardic Studies program, because of his extensive knowledge and the international impact his work has on interfaith relations.

“For years when many people had been saying that the Jews and Muslims will never get along, Aomar has been challenging them and saying no,” said Jonathan Bass, an L.A. area Jewish activist. “He has been on the cutting edge of a new world movement that promotes love and tolerance for all of God’s children through his work which shows the past historical evidence of the close cooperation between Jews and Muslims.”

Boum said he first became intrigued with Morocco’s Jews 22 years ago when he began researching his doctoral thesis that examined the views and interactions Muslims living in small villages in the country’s south had with Jews.

“In my research I found that over four generations, the Muslims in these small Saharan villages, who had no media exposure and had shared a closeness with the Jews in trying to survive in that desert environment, had no conflict with Jews,” he said. “Also, in Morocco we’re very fortunate to have a political system and culture that has promoted tolerance of all groups, including the Jews that have lived in the Moroccan desert since the destruction of the Second Temple.”

Boum said his academic work showing the historically close ties between Jews and Muslims in Morocco has influenced officials in the country to include Moroccan Jewish history in the textbooks and curriculum for students of various ages.

“I personally believe that the study of Morocco’s Jews can allow the next generation living in Morocco to learn how important the Jewish community’s contributions have been to the nation over the centuries,” he said. “It also allows Jews today to realize that there are Muslims who have lived side by side with them in peace.”

Boum said he is working on a book about the experiences of the Moroccan Jewish community living in Los Angeles and another about the late King Mohammed V’s relationship with Jews during the Second World War.

In recent years, he has written extensively in academic journals about the Holocaust’s impact on the Jews of North Africa. His fictional graphic novel for young adults about the experiences of a Jew who fled Nazi Germany for North Africa will be published next year in English, French and Arabic.

When asked about the impact of the Abraham Accords peace deal between Morocco and Israel in 2020, Boum said the initiative has indeed increased direct business, tourism and academic ties between the two nations but it is not seen as anything out of the ordinary for many Moroccans.

“In Morocco the Abraham Accords are not really seen as a normalization of relations with Israel, but instead they are seen as a continuation and strengthening of ties between Morocco and its Jewish community that have been around for quite some time,” he said.

The evening honoring Boum was filled with displays of affection for Morocco from the Em Habanim congregation. Not only were traditional singers and musicians from Morocco on hand performing Arabic songs, but the flag of Morocco was on display along with the American and Israeli flags, as was a photo of the current monarch, King Mohammed VI.

After all three nations’ national anthems were played, Bittan recited a Hebrew prayer of well-being for the king.

“The current king of Morocco, his late father and his grandfather have all shown great kindness to the Jews of Morocco and created an environment of relative peace for the Jews there, so our community has always prayed for them,” said Bittan. “Unlike the Jews in other Arab and Islamic countries, we, the Jews of Morocco, did not experience extreme antisemitism, so we have a lot of pride for our Moroccan heritage.”

In 2019, L.A.-area Moroccan Jews honored Mohammed VI with an event titled “Salute to Morocco: Honoring a Dynasty of Tolerance.” That occasion featured a rare appearance by Princess Lalla Hasnaa, the youngest sister of the king, and nearly 50 delegates from Morocco, said Bittan.

Local and California state elected officials who were on hand for last week’s event said Boum had made a unique contribution towards bringing about positive interfaith dialogue. They presented him with multiple proclamations in recognition of his efforts. 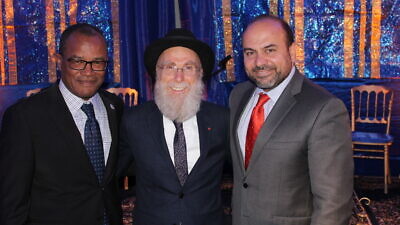 “In every major shift or change in a society, there is always one person who works day in and day out to find a common denominator that brings different people together, whether they are heads of state or everyday citizens. We in L.A. are very fortunate to have someone like that in Aomar Boum,” said California State Assemblymember Adrin Nazarian.

Also present was Driss El Yazami, the Muslim president of the Council of Moroccans Living Abroad, a Moroccan government organization, who presented Boum with an award on behalf of Morocco’s current Jewish community.

“Aomar has brought great pride to all of Morocco as an ambassador of peace with his important research into Moroccan Jewish history. He genuinely deserves these honors and many more,” said El Yazami.

Terrorist Cheerleaders Are Not Good Journalists

Grateful for Love and Joy at Princeton

Where to EAT and STAY in Calgary?

Can We Fight Antisemitism Without Losing Our Sense of Humor?

The Power of Words

How to Kosher Your Thanksgiving

The Eternal Hope of Israeli Art

House Minority Leader Kevin McCarthy (R-CA) vowed over the weekend to remove Representative Ilhan Omar (D-MN) from her position on the House Foreign Affairs Committee if he is elected as the Speaker of the House.
Blogs

Wine Tourism in the Heart of Sicily. In a few (too short) weeks 2023 will be upon us which had me thinking about travel trends...