Breed May Be Dying, But This Bookstore Owner Is Not Surrendering

Jacobs shows off his store like a proud parent. The 60-year-old father of three said, “every nook and cranny is packed.” 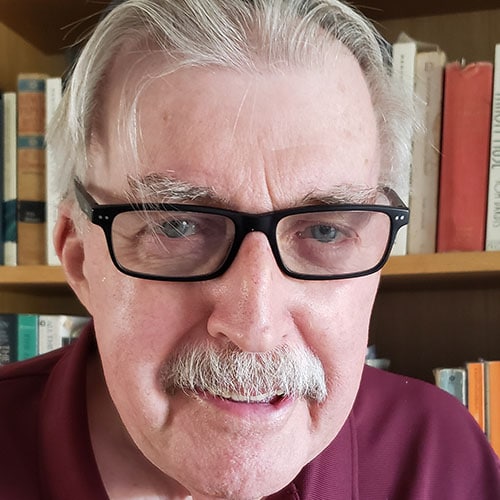 Since used bookstores have been sprinting toward invisibility for decades, discovering Tony Jacobs’ Sideshow Books on La Cienega Boulevard is a reader’s dream come to life.

“We have a deep inventory of all categories, [and] interesting books that aren’t commonly spoken of,” said Jacobs of the 30,000 to 40,000 volumes that live and happily breathe, busily, both in 2,700 indoor square feet and behind the store in containers.

Jacobs shows off his store like a proud parent. The 60-year-old father of three said, “every nook and cranny is packed.”

“It’s genetic. I am doing what I am programmed to do.”
– Tony Jacobs

Fifteen years ago, Jacobs was transitioning from a film career as a director/writer. “My vision was not this chaotic, crazy man’s bookstore,” he said. “But then came the pandemic. I kept storage units off-site, and I no longer could pay for them. So I closed those.”

Since no one was coming in, he brought things from storage into the bookstore. I said to myself, ‘When we reopen, I will tidy up and… oddly enough, tidying up did not happen,” he laughed.

“Starting in March last year, no one could come in for several months,” he said. “The shutdown was a difficult time for me to get any kind of loan since loans are predicated on the number of employees you have. It was a dark time. My savings were spent.”

Officially, he started to re-open in June, but he wasn’t getting any customers. He dedicated that time to organizing as much as he could. “I put a sign on the door that said, ‘I am here. I am open. Call me to come in,’” he said.

It didn’t help. Prospective customers later told Jacobs they thought he was closed since there was a sign on the door – but they had failed to read it carefully.

“No one came in,” he said. “Literally, I had three or four customers a week. Normally, I will have 10 to 20 a day, which isn’t phenomenal anyway.”

Jacobs said he believes the seeds were sown for his love of books at a young age. Growing up in the Cleveland suburb of Shaker Heights, he was attracted to books starting when he was three. Later, “I would go with my mom to yard sales and estate sales. I remember wonderful finds, [like] old paperbacks from the ‘40s and ‘50s. The covers were amazing. I got excited about reading these books from another time.”

As an adult, Jacobs began seriously collecting books. “I came out here from New York, where I had been directing children’s shows for Nickelodeon, MTV and PBS, to do more film career stuff in the late ‘90s,” he said. “I brought with me 70 boxes of old paperbacks.”

When he wasn’t busy with his film jobs, he would sell books on eBay. “At the beginning of eBay, you could sell anything,” he said. “And that was very lucrative. I would find something in a box and watch people bid over it. Suddenly this was a good, moneymaking career.”

He decided to become a full-time eBay seller so he could be home for his three boys, who were toddlers. “I couldn’t do the film hours, which would have meant getting up at 4:30 in the morning, back at 7:30 at night, still wrapped up in the day’s work,” he said.

While Jacobs’ family was not particularly religious, Shaker Heights was a Jewish area, and he grew up in what locals called The Temple, Temple Tifereth-Israel. Rabbi Abba Hillel Silver, one of America’s highest-profile rabbis, led it from 1917 until 1963.

There was also a Jewish link to Tony’s early interest in books.

“My aunt, Tanya Corbin, who passed away 12 years ago, had done genealogical research,” he said. “She found the family name was Jacobs. Prior to that, though, there was a link to the Strashuns of Vilnius. In the 1800s, the Strashun Library was the largest library of Judaica in Eastern Europe.

“When I found that out, I thought ‘Oh my God, it’s genetic,’” he said, laughing. “I am doing what I am programmed to do.”

The terrorist was firing a gun at congregants leaving a synagogue located in the East Jerusalem neighborhood of Neve Yaakov; the terrorist was subsequently shot and killed by police.

Recently, Gad has proven to be among the most vocal Jewish stars in Hollywood to speak up against antisemitism.