Hanukkah is truly the coziest, most joyous time of the year. 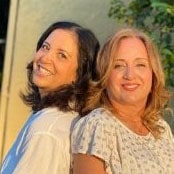 Artemisia Gentileschi was a famous Baroque artist who lived in the Florence of the Medici and the Rome of the Popes. Her dramatic paintings are filled with heroines from the Bible. But it is the audacious story of Judith, a young widow and unlikely savior of the Jewish nation in the second-century B.C.E., that Gentileschi depicts in six magnificent paintings.

When her famine-stricken town is besieged by Nebuchadnezzar’s top general, the cruel Holofernes, Judith decides to take action. Accompanied only by her maid-servant, she enters the enemy camp. Enticed by her beauty, Holofernes invites her to a banquet where salty cheese is served. They are alone in his tent when he falls asleep in a drunken stupor. Judith prays to G-d for help, then with great courage and fortitude, she takes Holofernes sword and decapitates him in one bloody stroke. With the Assyrian army in a state of confusion, Judith urges the Israelites to stage a surprise attack. They emerge from the battle victorious.

Nowadays, the Hanukkah celebration centers on the victory of the Maccabees over the Assyrian-Greeks, but in the Middle Ages, the Rabbis placed the story of Judith front and center.

Hanukkah is truly the coziest, most joyous time of the year. Every year, I invite my brothers, my nieces and nephews and my cousins and their children. I set up a latke bar with a huge pile of potato latkes and lots of toppings. The choices include caramelized onions, sautéed herbed mushrooms, Labne, kosher caviar, smoked salmon and whitefish salad. In a nod to Ashkenazi tradition, I include a homemade applesauce.

There’s also a falafel bar with all the fixings—hummus, tahini, Israeli salad, pickles and olives. To add to the commemoration of the little crucible of oil that burned so brightly in the rededicated Temple, I also serve fresh-fried Sephardic style donuts called bumuelos and rosquitas.

We light the big, beautiful menorah that was given to Neil by the Sephardic Educational Center many years ago. Our children light their menorahs, a few more are lighted and then the glow in our home is immense and magnificent.

The very talented chef Sam Sheff (yes, Rachel’s son) inspired us to incorporate Japanese yam into our sweet potato latkes this year. The drier, starchier texture and sweet, nutty flavor of Japanese yams makes them the perfect ingredient for latkes. Their deep purple hue combined with the deep orange of the sweet potatoes made these latkes a thing of beauty and so incredibly delicious.

We contrasted the crispy sweetness of the latkes with two dips. One is an addictive Muhammarra sauce, made with jarred roasted bell peppers and walnuts and flavored with pomegranate molasses, fresh garlic and cayenne pepper. The other is a fresh tzatziki dip prepared with strained Greek yogurt, sour cream, finely chopped cucumbers, dill and mint.

We hope you try these recipes and top your latkes with some crumbled Feta Cheese and raise a toast to the indomitable spirit of Judith and the Jewish people.

Larache is an important Atlantic port city in northwest Morocco, located at the mouth of the Loukkos River. Settled successively by the Phoenicians, Carthaginians and Romans, the ruins of ancient Lixus sit on the north bank of the River. The cityscape is dominated by two forts. The ancient Kebibat fortress rises out of the sea and the fort of La Cignogne was built by the Spaniards, who ruled Larache from 1610 to 1689 and from 1912 to 1956.

Rachel’s paternal grandfather, Salomon Emquies was the proprietor of a successful spice business in Larache. A devout man, he attended Shacharit prayer services every morning. Knowing that his youngest son Albert was loath to leave his warm bed at such an early hour, he would bribe him with the promise of buying freshly prepared sfenj after the prayers.

The Berber street vendor would stand in front of a vat of boiling oil; his hands would quickly form rings from the creamy, yeasty dough mix and drop them in the oil. Before young Albert could blink, the dough would puff up and turn a warm amber hue and the vendor would string the sfenj on a palm frond and tie it into a ring. After paying the equivalent of a few pennies, Albert would happily traipse home with the rustic doughnuts. At home for breakfast, the sfenj would be coated with a sprinkling of sugar or a warm honey syrup.

Sfenj are still a common, very popular street food all over Morocco. The recipe originated in Andalusia, Islamic Spain, where in the 12th century an Arabic poet proclaimed “The bakers of sfenj are worth as much as kings!” The name itself comes for the Arabic word for sponge, likely a reference to the light, airy texture of these irresistibly addictive treats.

While in Larache sfenj were an everyday affair, we think they are the perfect (pareve) treat for Hanukkah!

Rachel Sheff and Sharon Gomperts have been friends since high school. They love cooking and sharing recipes. They have collaborated on Sephardic Educational Center projects and community cooking classes. Follow them on Instagram @sephardicspicegirls and on Facebook at Sephardic Spice SEC Food. Website: sephardicspicegirls.com/full-recipes

Hypocrisy Does Not Recognize Party Boundaries