As spiritual leader of one of the most widely known Reform synagogues in America, Rabbi Joshua Davidson tries not to be divisive on the holiest days of the year.

So on the High Holy Days of years past, when he stood before thousands of congregants at Temple Emanu-El in New York City, Davidson stuck to universal and uncontroversial topics. In 2015, he spoke about the synagogue’s history and mission. A year ago, in the heat of an acrimonious election, he talked about civic duty and the value of political participation.

His Rosh Hashanah sermon last week was on “trying to lift ourselves above the dishonesty, the incivility, the indecency which so many feel has become the societal norm,” he said. One of the hallmarks of that indecency, according to Davidson, was Trump’s response to the August white supremacist rally in Charlottesville, Virginia.

“I certainly mentioned the president in certain contexts,” he told JTA. “I mentioned his response to Charlottesville and condemned it. We have to condemn any sort of equivocation when it comes to bigotry in the strongest terms. His response was an affront to decency.”

Whether or not to use the bimah as a bully pulpit has become a particularly burning issue in the first year of the Trump presidency, which even his supporters acknowledge has been unusually divisive. Non-Orthodox Jews, who make up the vast majority of American Jewry, voted against Trump in wide margins. According to a recent poll, a majority of Orthodox Jews voted for him and approve of his performance.

But rabbis disagree when it comes to talking politics from the pulpit, especially when more Jews attend their synagogues than at any other time of the year. For every rabbi who insists on taking clear stands, others worry about alienating congregants who may disagree.

Rabbi Shalom Baum advocated policies as a past president of the Orthodox Rabbinical Council of America. But he avoids discussing politics from his pulpit at Congregation Keter Torah in Teaneck, New Jersey. The High Holy Days, he said, are a time to rediscover the good in other people, not to find more reasons to disagree. 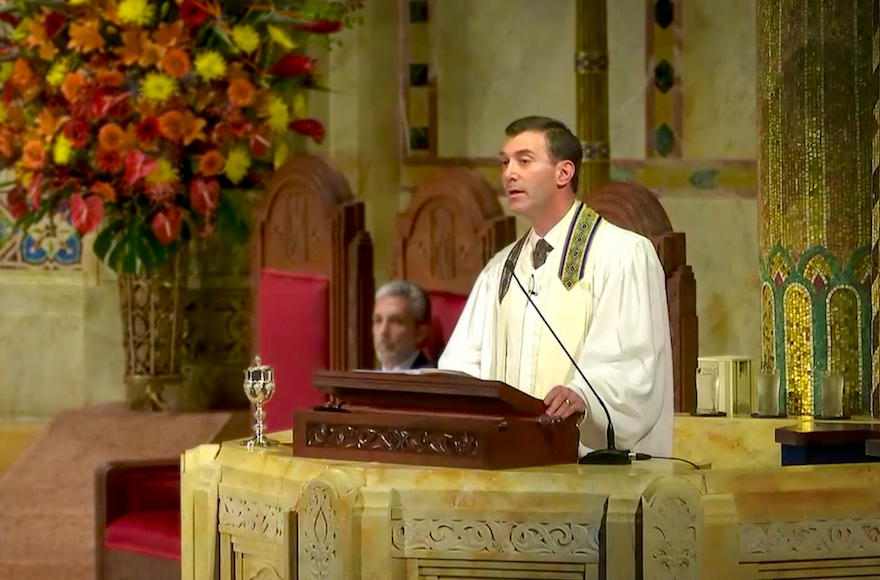 Other politically active rabbis agree that partisan political opinions don’t belong in a sermon — and especially not on the holiest days of the year.

Herzfeld’s first sermon focused on his experience volunteering to clean up Houston following Hurricane Harvey. His Yom Kippur sermon will be about the Charlottesville rally, but it won’t mention Trump. And though he has titled the sermon “Removing Our Walls,” Herzfeld insisted to JTA that he is not alluding to the border wall with Mexico that Trump has proposed.

Davidson is one of several prominent rabbis who used their pulpit on the holiest days of the year to criticize the president. Some are open about their politics and said opposition to Trump was either a matter of consensus in the congregation, or his actions have been too egregious to ignore.

“This isn’t a time for us to be silent or to be too careful not to offend anybody,” said Rabbi Sharon Brous of Ikar, an independent congregation in Los Angeles. “But instead, it’s a time for us to speak as clearly as we possibly can about the dangers we are facing as a community and a nation.”

On the first day of Rosh Hashanah, Brous in her sermon accused Trump of making America “a place in which anti-Semitism is condoned by the state.” She also criticized establishment Jewish organizations for not speaking out enough against Trump for what she said are rhetoric and actions condoning the white supremacists.

Brous has opined publicly about her politics in the past and delivered an invocation at President Barack Obama’s 2013 inauguration. Her second-day Rosh Hashanah sermon this year advocated reparations for African-Americans.

“Many of our Jewish institutions failed to find the words to condemn the spike in anti-Semitic attacks that coincided with the 2016 presidential campaign,” Brous said in the first-day sermon, adding that they “failed to speak out against white nationalist sympathizers — men who have trafficked in anti-Semitism and racism for years — becoming senior White House officials.” 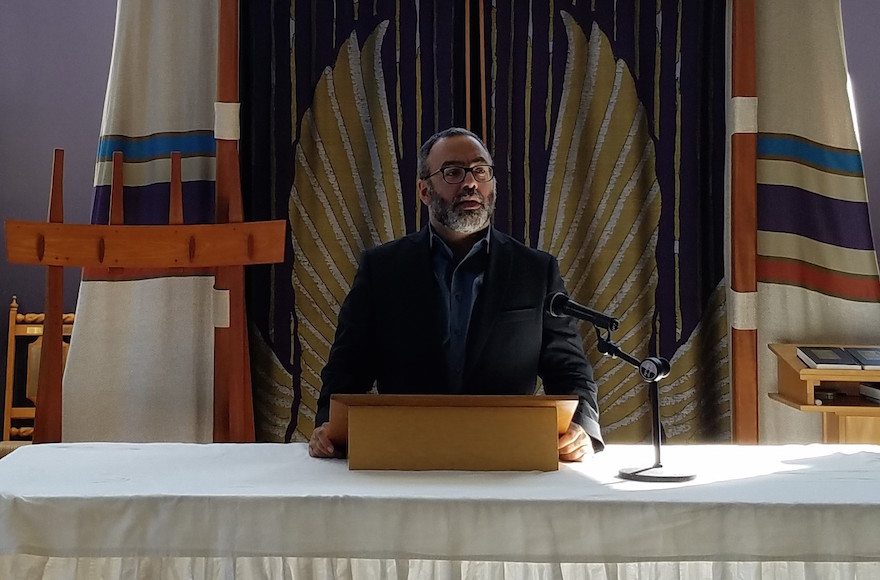 Rabbi Sharon Kleinbaum of Congregation Beit Simchat Torah, an LGBT synagogue in Manhattan, likewise accused Trump of cozying up to anti-Semites. Her whole congregation opposes the president, she said, so calling him out was not a risk.

In May, Trump signed an executive order allowing clergy to endorse or oppose candidates from the pulpit. The order effectively repealed the Johnson Amendment, which threatened the tax-exempt status of religious institutions if they appeared partisan.

While a range of Jewish groups criticized the order as eroding the separation of church and state, Trump characterized it as an expansion of freedom of religion.

Another rabbi unafraid to get political, Menachem Creditor of Congregation Netivot Shalom in Berkeley, California, sermonized about not becoming ensnared in the now-endless stream of headlines and presidential tweets. While he stressed that his point was not to be consumed by any one issue, his sermon did criticize Trump’s policies on immigration and climate change.

He also spoke about the virtue of mixing religion and politics, which has been a hallmark of his career. An outspoken advocate for immigrant rights and gun control, Creditor announced recently that he would be leaving his pulpit to become a full-time activist.

“I think the posture of religion has always been within the world,” he told JTA. “Even the most devout of religious communities all band together to vote in certain patterns, act in certain patterns to influence the world. To abdicate that responsibility is to become islands and ultimately self-idolize.”

Muslims Helped Me Process the Deadly Shooting in My Synagogue